This post is a continuation of our Amazon Elastic Container Server (ECS) Series outlining the best practices towards running containers within AWS.  If you haven’t already, give our ECS overview post a read here before continuing with this one.

In our last blog post, we discussed the available options of deploying containers to AWS using Amazon Elastic Container Server and explored the served and serverless options for this.  An important aspect, and arguably the main ingredient, to hosting anything on the Cloud is deploying updates utilising techniques which mitigate deployment risk.

This blog post will follow the Serverless AWS Fargate path to automate the deployment of containers whilst utilising immutable infrastructure to allow for sufficient rollback time frame if things don’t go as planned.

Thousands of pre-baked containers are readily available from services like DockerHub including base images for operating systems, databases, servers, and applications.  These images can be pulled and deployed into Amazon ECS and AWS Fargate by referencing their tags.

AWS CodeCommit is a fully managed source controlled git based repository.  CodeCommit makes it easy for team collaboration eliminating the need for customised source control methods or external git repositories integrations into AWS such as GitLab or GitHub.

CodeCommit can be used to store our customised Docker container source code including our dockerfile.

AWS CodeBuild is a fully managed service which compiles source code, runs tests, and builds application packages which are ready to deploy.  Codebuild pulls application source code from the source (CodeCommit) and builds a container using instructions defined in a build specification file (buildspec.yml) stored within the source.

The build specification file outlines the steps which are taken during pre-defined stages of the build.  As seen above CodeBuild initially logs into Elastic Container Registry (ECR) during the pre-build stage –  this step allows a container image to be pushed to ECR upon build completion.  The container is then built to specifications defined within the dockerfile.  Finally, the container image is named, tagged and pushed to ECR for storage.

AWS CodeDeploy manages the deployments to services such as EC2, Lambda, On-Premise servers and AWS Fargate.   In the aforementioned stages, the source has been retrieved and container built and pushed to ECR.  The final step is to instruct ECS to pull the newly created image from ECR and deploy it to AWS Fargate. An Application Specification file (appspec.yml), stored within the source, is obtained by codedeploy with instructions to coordinate deployment to ECS.

The most basic Application Specification file, as highlighted above, contains information on where a docker image should be deployed, what task definition, and version it should use, the container name and host port.  However, more detailed configurations can be defined such as network configuration – subnets, security groups, and VPC, plus the hooks to execute scripts at each stage of deployment.

Blue/Green deployments allow for a zero downtime deployment experience due to it’s instant rollback capabilities.  Unlike its counterparts which require instances to be rolled back gradually, Blue/Green runs two versions of the application in parallel environments (for a given time period) allowing traffic to be shifted and seamlessly rolled back to the previous version.

This is achieved by creating an entirely separate environment when a new version of the application is released. In traditional served environments a new auto-scaling group is created behind an application load balancer.  Whereas, using serverless architecture such as Fargate utilises target groups to control the weight of traffic going to each environment. 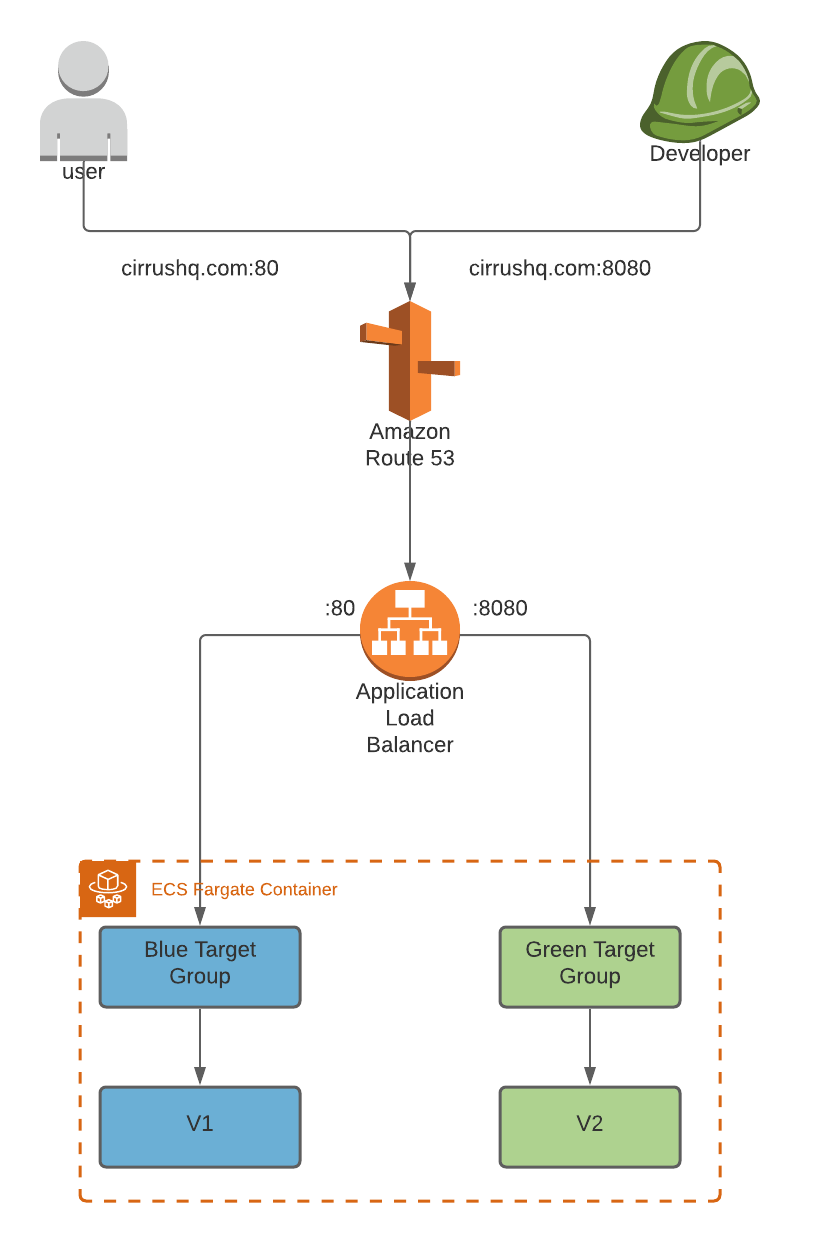 Depending on the application a few considerations on whether Blue/Green is the right deployment method to meet your needs. Maintaining user sessions during a new version release is critical to preserve user activity whether a deployment is successful or roll’s back to its previous state.  Storing session data in external services such as ElasticCache’s MemCached ensures users data persists regardless of which version they are accessing.

Deploying database schema changes require extra consideration and planning as both the old and new versions persist at the same time. For example, renaming a column such as firstname to forename may seem like a simple change but the front-end application may be inconsistent with the schema change if the column is simply renamed. To overcome this, both versions of schema must persist in the newly deployed database. Therefore, the application can successfully retrieve the data regardless of which version is live.

CirrusHQ has a breadth of knowledge on deploying, running, and supporting workloads using Containers on AWS. If you would like to find out more from CirrusHQ regarding your container deployments, feel free to contact us via our contact page.